The most recent edition of CRoC has been published (as a supplement to the parent journal Cities). The contents are as follows and papers may be viewed at http://www.sciencedirect.com/science/journal/02642751/41/supp/S1: 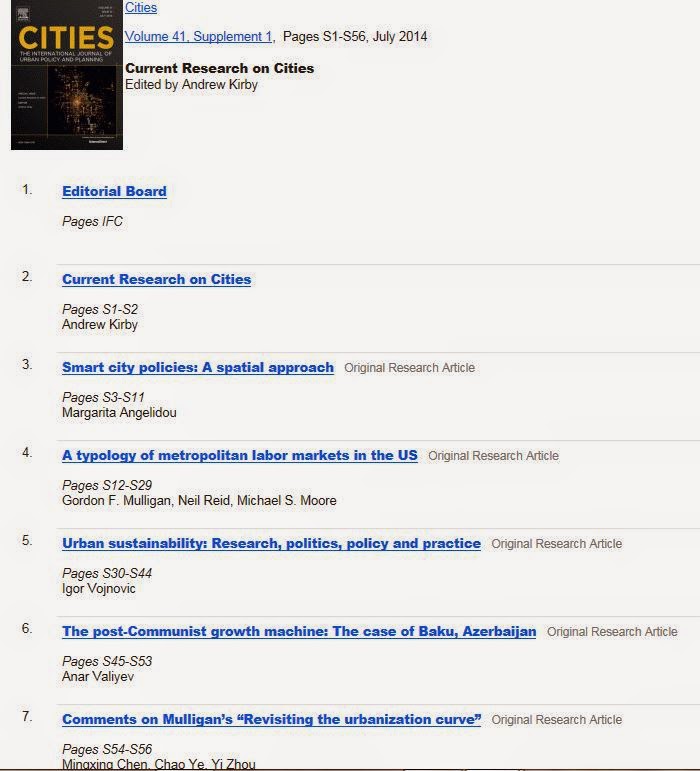 Posted by Andrew Kirby at 3:22 PM No comments:


Peter Hall died last month. I won't try to assess his legacy, as I wrote an Editorial in Cities some years ago when he was knighted. Then, I expressed thanks for all the support he gave to the journal, for which he was a Board member for a long time.
I was saddened by his sudden death. He had acted as a mentor to me, and gave me my first job in 1976, at a time when they were few and far between. I had been badgering him for some time to write a paper for CRoC but he claimed that at his advanced age he was cutting down on his commitments [but went on to produce at least two more books!].
I was pleased to see that he was featured in the Economist [for August 9] but that turned rapidly to disgust as I read the hatchet job that someone had assembled [correspondents tell me that this was not the only unkind assessment of Peter's legacy].

I wrote to the Editor with the following complaint.

"Your obituary of Sir Peter Hall (August 9th 2014) does a disservice both to the man and his profession. Rather than the obsessive trainspotter-cum-hack that one might imagine from your account, Dr. Hall had a research doctorate and began his career at the LSE, which should give him some legitimacy in your eyes. He held a chair at the University of California, Berkeley for many years, and was still active as a Professor at UC London at the time of his death. He wrote and edited over fifty books and published hundreds of scholarly articles in addition to his more polemical work.  Many of his books remain in print decades after they were written, including pioneering work on city regions and on urban creativity, which predated the current fad for 'the creative class'."

This does not really make the case for what I wanted to say, but then an astonishing scholarly legacy should stand above such mealy-mouthed critiques. This excellent summary [including an evocative photograph] is what anyone who is unfamiliar with Peter's legacy should know about this wonderful man.
Posted by Andrew Kirby at 4:55 PM No comments:


I’m embarrassed to see that it is almost two years since this site has been active. There have been dozens of posts on the CRoC Facebook site, and one supplement to Cities appearing as Current Research on Cities (Volume 32 S1). But, nothing here.
In part, this was due to personal circumstances that kept me away from my desk on numerous pilgrimages, although the last of these concluded at the end of 2013. In part it has been due to an unusual writing schedule, that has resulted in several papers that were published almost immediately so that it seemed pointless to reproduce them here.
There is also the question of whether this format has any merit in a technological moment that skews towards short-form posts. I have much savvier colleagues who have dumped their blogs entirely.
So, I plan to experiment once more but with shorter posts, that are more frequent and hopefully more informative. My choice of topic with which to resume will not, I hope, be a model for the future, but it is something I felt strongly about and this is an appropriate place to say what I wanted to say.
Welcome back!

Posted by Andrew Kirby at 4:08 PM No comments:

Some thoughts on Jane Jacobs, public space and more

This is an Abstract for a paper for an edited collection on tolerance and urban space. If the bullets and font don't repel, the content may.... 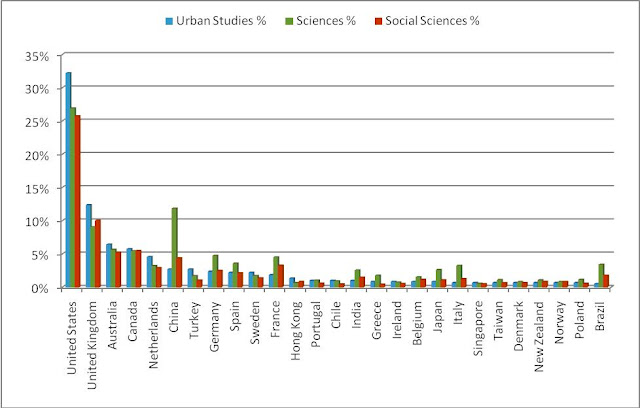 Figure 1: the percentage of papers within a category that have at least one author with an affiliation in the countries displayed: e.g. 33% of all Urban Studies papers have an author with an American affiliation.
A second issue of importance is that research undertaken both in the Social Sciences and Urban clusters is attentive to scale; we have marked the appearance of both ‘neighborhood’ and ‘metropolitan’ in these columns. In contrast, Science research considers broader categories, such as urban versus rural. This reflects the tendency for applied science to apply itself to broad processes such as climate change, and the much narrower concerns of social scientists with phenomena such as gated communities.
Why these results are of relevance
The data suggest that there may be only limited integration of research efforts undertaken by those who work explicitly in urban studies, social scientists who work in cities, and scientists who are concerned with the environmental impacts of urban development. Some part of this may be driven by geography and will disappear as more Chinese, Korean and Japanese scholars publish in international journals [2].  It remains the case however that there is an astonishingly small commitment to pressing environmental issues such as climate change, sustainability and adaptation outside the science cluster.
It is to address this problem that CRoC has been developed.  As a meta-journal, the aim is to publish solicited material that can assist in bridging these silos, while building on the points of integration that do exist within the different communities of urban scholarship.
References:
(1) Kirby, A. (2012) “Current Research on Cities and its contribution to urban studies” Cities Volume 29, Supplement 1 S3–S8 http://dx.doi.org/10.1016/j.cities.2011.12.004
(2) Haijun Wanga et al. (2012) “Global urbanization research from 1991 to 2009: A systematic research review’ Landscape and Urban Planning 104, 299– 309.
Posted by Andrew Kirby at 6:34 PM 1 comment: