Stress and the City

Medical researchers in indicate that MRI scans of the brain show that city dwellers display different manifestations of stress than do those living in rural areas (see Figure 1 for citation information). 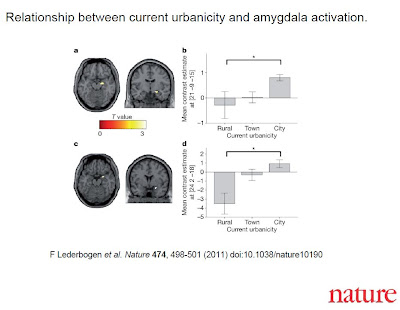 This seems plausible, given that dense urban areas possess numerous sources of stress, some environmental (noise for instance) and some social (the threat of or even reality of elevated crime levels in some neighborhoods, for example). It is also provocative information, given the efforts that are made by some in the design community to connect poor health outcomes with low-densities (in suburban areas) rather than high-density central cities.
Another part of Nature’s coverage of paper also caught my attention: editorial writer Alison Abbott suggested that the research “may also open the way for greater coopera­tion between neuroscientists and social scien­tists. ‘There has been a long history of mutual antipathy, particularly in psychiatry,’ says sociolo­gist Craig Morgan at the of in . ‘But this is the sort of study that can prove to both sides that they can gain from each others’ insights.’” (Nature, June 23 2010 p. 472).  The editorial continues, writing of the neurological research: “Yet he has had trouble interesting his social-science colleagues in setting up joint projects. Such lack of sympathy across the cultural divide is common, says Ernst Fehr, an econo­mist at the University of Zurich, Switzerland, and a pioneer in the field of neuroeconomics, which studies the neurological basis of eco­nomic decisions. ‘But social problems have neurobiological effects, which, in turn, may exacerbate the social problems,’ he says. The social sciences have as much to gain from crossing disciplinary boundaries as the biological sciences, says Morgan. ‘Sociologists and epidemiologists establish associations that are plausible — like immigrants may suffer more mental illness because of social isolation — but they are validated when neuroscientists demonstrate a robust biological mechanism.’
These claims are interesting here, given that URBlog exists with the goal of providing information on cities to non-urbanists. It does though suggest some unnecessary antipathies on behalf of medical researchers. It is hardly plausible to suggest that social scientists are uninterested in mental health issues—the journal Social Science and Medicine published 18 papers in just 2010-11 on mental health in urban areas.
The problems are based in different research strategies. The following diagram (from Galea, 2005) shows some of the complexities of health outcomes. Moreover, Galea suggests that social scientists tend to work left to right (and often deductively, I’d suggest) while medical research starts (inductively) from the right hand side and tries to move left. 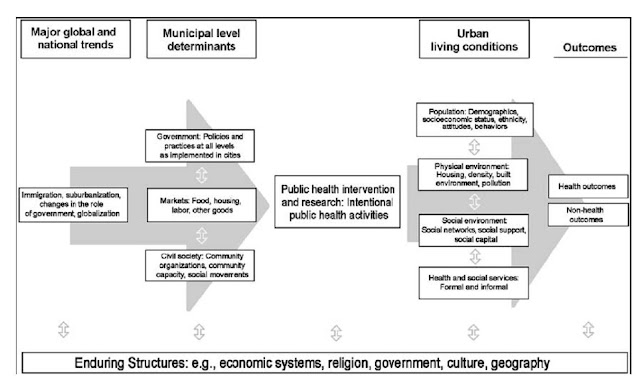 So, we have a complex real-world problem, and an almost-as-complicated problem of research design and methodology. We shall, in consequence, be focusing a good deal of attention on health issues in Current Research on Cities next year.
Posted by Andrew Kirby at 1:19 PM No comments:

This may be the most fun that I’ve had in a while, at least involving urban studies. I am indebted to Jonathan Feinberg of

and Young Wu of Elsevier who did the search on papers published in 2010 in the Humanities and Social Sciences that contained key words ‘urban’, ‘cities’ or ‘city’.  This yielded over 17000 keywords, which were dumped into Wordle. Unsurprisingly, "urban" anchors the heap, but it is interesting to see what else emerges...."health" is a significant presence (with "health" "care"), along with "policy", "planning" and "development". Neither "global" nor "creative" makes its presence felt. "United States" is the most prominent regional descriptor, but "China" is emerging, as we would expect. There seems to be no mention of climate change or immigration, and transport is not as prominent as one might expect. And its still too soon to see 'foreclosure' in print...perhaps in 2012.

Posted by Andrew Kirby at 9:13 AM No comments:

You mean we could just fix this?

This last week of June saw a webcast organized by the Urban Institute in , designed to focus attention on the new publication Beyond Privatopia: Rethinking Residential Private Government. Titled “Private community associations: boon or bane for local governance?”, the event brought together Evan McKenzie, professor of political science and law at the University of Illinois at Chicago (and the author of Beyond Privatopia) and Robert Nelson, who is a public policy professor at the University of Maryland, College Park and the author of Private Neighborhoods and the Transformation of Local Government (also published by Urban Institute Press, in 2005). The discussion was nimbly moderated by Rolf Pendall, director of the Metropolitan Housing and .
Although the actual title of the debate is enough to encourage torpor (and it was apparently not well attended) the issue of governance is central to the urban future. And the way in which ‘public versus private’ plays out in planning and governance will be at the core of the manner in which many cities develop economically and how they deal with the challenges of climate change adaptation in the next fifty years (a point I’ll return to below).
As I have argued at length elsewhere, Home Owner Associations (HOAs) get a bad rap, both in the popular press and within the academy. Evan McKenzie is perhaps the most thoughtful of the academic critics and his commentary can be traced back to 1994, before the issue of privatization was on most people’s radar. Still, his critique is what one would expect from an individual who has a self-identified interest in what he describes as the “gross imbalance” of power between HOAs and their members (p. xii of Beyond Privatopia). In his presentation, he argued against HOAs on the grounds that residents lack choice, do not know what they are signing when they enter into the home owner contract, and that many HOAs are in a financial hole. He also argued that the principles of common interest developments (CIDs) were developed in the past by, and for, richer and, by implication, smarter people than those who now find themselves in HOAs; and that CIDs are a way for developers to increase residential densities. The first of these suggestions seems more than a little condescending; the second is unusual insofar as most critics of suburban housing regimes are usually keen to increase residential densities by any means possible.
Robert Nelson took a different approach, on which more in a moment. His work (exemplified by his 2005 book) is an extremely thoughtful dissection of the failures of the municipality and the need to move toward more responsive polities—such as the neighborhood association. As he points out, for example, illegal immigrants and those with second homes have no voting rights in places where they live and pay property taxes, but they do have a say in their neighborhood. His optimism for the progressive possibilities of neighborhood associations is truly innovative.
Nelson also said one thing that almost caused me to fall from my chair during his presentation—“you make improvements, when there are problems”. In other words, if HOAs are prone to fiscal challenges, or if residents do not understand their obligations, then these are fixable. They don’t negate the entire system.
This is a breathtaking observation because it flies in the face of most academic thinking, (and increasingly, much popular thought). In short, if a phenomenon—gated communities, say—can be assailed on various counts, then an ironclad case has been made against all gated communities for all time, and they can be added to the list of the world’s evils (and in that line of idiotic argument, gated communities have actually been compared in print to concentration camps). So it is an astonishing sideways leap to hear the alternative: if things are not working, we don’t get rid of everything, we don’t legislate something out of existence—we just fix things.
As I observed above, this is important because it goes to the heart of how we approach the urban future. For at least a decade, for instance, we have been told that climate change must be tackled via mitigation strategies; authors who have advocated for adaptation strategies have been roundly criticized for their Quisling attitudes. Yet this is another example of absolutist thinking: if carbon production is bad, then it must be stopped—even if that does nothing to prepare our cities for the impacts of climate change already being felt. Robert Nelson provides us with the alternative: when there are problems, find ways to fix them.
Posted by Andrew Kirby at 1:12 PM No comments: