The recent visit of Hurricane Irene underscores—yet again—certain self-evident truths concerning the uneasy relations between cities and nature. As the dead are buried and the insurance estimates tallied, the usual stupid questions are asked—was there an over-reaction, was ‘Wolf’ cried too early, should governments even be ordering evacuations?... and so on and so forth.
Let’s be clear about certain things that seem, strangely, to be mysterious to many in the . First, nature is like a big black bear. It can be cute but it can also kill you, even if it has a cuddly name like Irene and Katrina. Second, smart people understand the risks that they face. Third, smart people adapt to those risks. Fourth, it is quite possible for small community groups to adapt to their natural surroundings but for that to happen, they would have to understand the complexities both of nature and science.
Let’s tackle these in sequence. Just because tens of thousands of people die annually in traffic accidents or handgun incidents is hardly a reason to downplay the small number of deaths that occur from earthquakes, tornadoes and hurricanes. After all, if Americans had smaller vehicles, better instruction and stricter rules about blabbing on cell phones, then fatalities on the roads would decrease, and if there were no handguns, then accidental deaths and suicides might decrease too. But not everything is about the body count. The impacts of natural events may usually be low in human terms but are excessively high in financial costs: the insurance industry reckons the annual impact to be in the region of $35 billion in the alone, with spikes in specific years. A recent report from CERES presents the diagram (below).
The report is valuable because it emphasizes that while a good deal of attention is (rightly) placed on coastal real estate, that is hardly the end of the story. While nor-very-smart consumers and unscrupulous real estate professionals—assisted by lackadaisical planners and validated by FEMA—have been actively building big homes in marginal locations (e.g. on coastal islands), there is also plenty of ill-advised building on inland flood plains and fault zones. 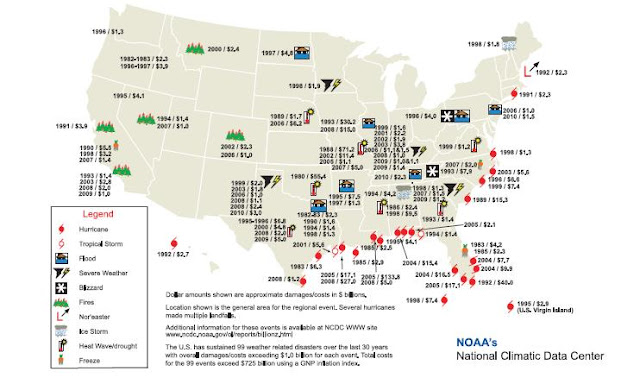 The potentially catastrophic impacts of natural disasters should not be underestimated; the Japanese have suffered two enormously destructive earthquakes in recent years that have had serious impacts when measured in the context of the national GDP, as this graphic from the Economist indicates. Note too the small role that insurance has played in the aftermath of many of these events, compounding the financial impact. 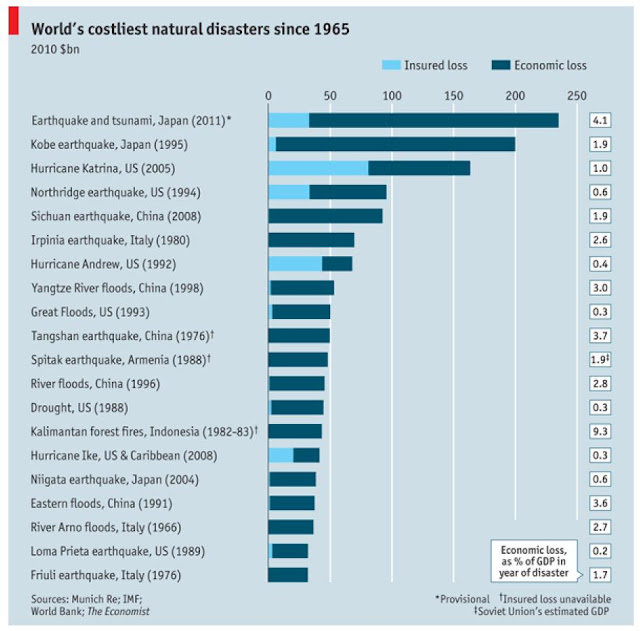 The message to be taken from Irene (and a score of other events in recent years) is that savvy individuals learn what risks they face in the locations they inhabit. Smart communities adapt to these risks and to the risks that they will face in a shifting future with more extreme weather events. And most crucially, those who decry the roles of government and of science will offer an alternative to a future of more extreme and more expensive natural catastrophes: prayer, anyone?
Posted by Andrew Kirby at 5:55 PM No comments: